Cody Ryanson is a recurring character on Glee: The Next Direction. Cody was created by Coleisawesome.

Cody is a happy kid and he loves singing and acting. He is from NYC where he met Rachel Berry after one of her shows and he asked how she got so far and she said glee club. Later his mom wanted to move to a more calm place and they went to Lima and Cody got transferred to McKinley. Although happy now he wasn't a while ago when his parents divorced. He got over it by singing and dancing all the time. He was born on January 14, 1997. He wants to star in movies and tv shows. His parents test all the time on life but Cody just wants to be happy. He struggles through high school and can't wait for college and to take off his acting/music career.

Cody is introduced in this episode, and is at auditions, along with Ahmet and Diana. The three sing Treasure. Cody and Diana make into the New Directions, where he then appears in meetings.

Cody competes with the boys in the Boys vs. Girls competition, and later performs with the New Directions at Invitationals. He has a solo in Bonfire Heart.

Cody is seen confused when Marley walks out of the Choir Room, having told the club the weekly meetings are cancelled. Later, it is revealed that Marley's dad has passed away, saddening Cody. Along with the rest of the New Directions, he comforts Marley during the difficult times.

Cody is seen in the episode watching performances by other members.

Cody is seen throughout the episode appearing in Glee club rehearsals and meetings. When Aidan tells the club about Rocky and Leah competing over him, he is shocked. At the end of the episode, he can be seen performing with the New Directions.

Cody is seen throughout the episode, attending Glee meetings.

Cody sings with the New Directions during Sectionals.

Solos (In a Group Number)Edit 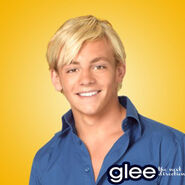 Season One Portrait
Add a photo to this gallery
Retrieved from "https://glee-the-next-direction.fandom.com/wiki/Cody_Ryanson?oldid=6457"
Community content is available under CC-BY-SA unless otherwise noted.